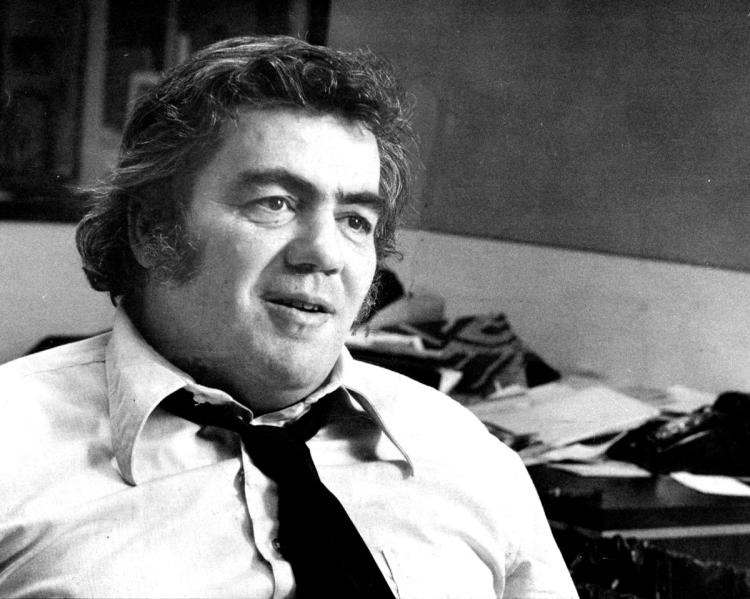 A man I taught to write wins a Pulitzer Prize for journalism a while back and dies just this week.

The Puitzer is for newspaper commentaries “ … which consistently champion ordinary citizens.”

The man’s name is Jimmy Breslin. He’s Irish and fat and looks like a debauched choirboy when I see him last. He drinks too much and smokes too much and wears clothes like he sleeps in them which, some of the time, he does.

For years Jimmy Breslin has had a passionately public affair with the ordinary people of New York City. He loves them. They love him. They show their love by not electing him deputy mayor of the city when he runs for that high and impossible office, and by reading his newspaper column where they see themselves and their lives and the lives of people they know.

It’s the great New York newspaper strike of 1968. Temporarily unemployed newspaper writers who think TV journalism is just a passing fad and has nothing to do with real journalism suddenly find TV newsrooms very nice places indeed — if only they can get jobs in them.

The New York Herald Tribune is on strike. So Jimmy Breslin is a temporarily unemployed newspaper writer. He signs with WABC, the ABC station in New York, to do his column on TV and prevent any interruption in the flow of groceries to his six kids and wife, the former Rosemary Dottalico.

To understand anything about Jimmy Breslin you have to understand that while he writes with more soul and heart and emotion and caring than any other American newspaperman of his time, he is also a very tough cookie indeed.

Jimmy Breslin comes out of Queens. One of the toughest places to come out of. A lot of people don’t. There’s evidence — which he doesn’t deny — that his only educational diploma is from Elmira Reformatory.

Before The New York Herald Tribune goes on strike and he still has a job, Breslin leaves his beloved New York, with considerable reluctance, to cover some of the more significant events of our time.

He goes to Viet Nam. He ignores the Five O’clock Follies news conferences called by the American generals who specialize in lies and tactics and strategy and dinner in the officer’s mess, even though he is the most famous person around and could have had a lovely war, well diluted with excellent Scotch.

Instead, Jimmy Breslin goes into the paddies, with the ordinary GIs who live and fight and sometimes die in the paddies and aren’t heroes most of the time and don’t know or even care what the hell the war is about but do know that they want out of this hell and want out now.

He writes about a battalion of Marines at the battle of Van Tuong, “the kids of eighteen, nineteen, and their early twenties”:

Somewhere close, artillery was going off. Jets screamed in the sun overhead. They sat with their chins down so the sand wouldn’t blow in their eyes. They talked about an amusement park in Long Beach where young kids go. Then Kendall’s eyes came up and he saw a guy walking toward them from another hole.

“What are you, soft?” he yelled. “You’ll get shot right through the ass doing that.”

The other two looked up. They all looked the same. Three kids in a foxhole with faces that are very old.

Breslin goes to London because Winston Churchill is dying. This prickly professional Irishman drinks in a pub where people remember the British lion:

“E was there when ’e was needed,” another one of the women said.

Then one of the other women said something and so did another one, and the man at the bar started talking and now Moad’s fist shook in the air again and here in this little bar, with over twenty years gone since anger was needed, the fire came out again and now you could see just what kind of job this Winston Churchill did for his own when they needed him.

Jimmy Breslin goes to Ireland and writes about The Troubles and The Easter Rising and “the lovely British” and their legacy for Ireland:

The oppression ended fifty years ago. But the product of it still is in Dublin. The kids on Sheriff Street and the blocks and alleys around it live in houses that have overflowing garbage cans inside the front doors and no baths inside the flats.

Jimmy Breslin writes about the people who live in the slum tenements of America and have no hope but do have guns and would really, really like to kill a whitey. Just one.

And about other people in the tenements who don’t have guns so throw rocks and garbage and sometimes Molotov cocktails from rooftops at white police and white firefighters and white reporters in the streets below.

All white and pink and blue-eyed and Irish, Breslin walks into the riots and writes about them so white people can understand the obscenity of racism and why — when you’ve got no hope left, none at all — you burn, baby, burn.

Jimmy Breslin is scared of nothing.

But Jimmy Breslin is terrified of television.

I’m all of 26, fresh off the boat from reporting on the Congo wars, very English-South African, a brand-new producer/reporter with ABC News in New York.

What little I know about New York comes mostly from reading Breslin’s column.

So they make me Breslin’s mentor and editor.

They make me the editor of the Irishman from Queens who covers the freedom marchers in the redneck South and writes:

You have not lived, in this time when everything is changing, until you see an old black woman with mud on her shoes stand on the street of a Southern city and sing “ … we are not afraid ” and then turn and look at the face of a cop near her and see the puzzlement and the terrible fear in his eyes. Because he knows, and everybody who has ever seen it knows, that it is over. The South as it has stood since 1865 is gone. Shattered by these people in muddy shoes standing in the street and swaying and singing “We Shall Overcome.”

They want me to teach the great writer Jimmy Breslin to write.

On the first day he’s with ABC, Breslin comes into the newsroom with his friend Fat Thomas who weighs 415 pounds and makes a living by betting on which horse will pass the winner’s post first.

Breslin is given a tiny cubicle next to mine, a desk and a typewriter. Fat Thomas finds the widest chair in the newsroom, takes it without asking, puts it carefully outside the opening to Breslin’s cubicle and sits and waits for Breslin to write.

Fat Thomas doesn’t talk to me. Not once. Not once in all the long weeks the newspaper strike lasts and he sits outside Breslin’s cubicle next to mine and watches Breslin write.

Breslin tells me Fat Thomas only talks about horses anyway so I’m not missing much.

Inside that cubicle, Jimmy Breslin writes and sweats.

All the time he writes and sweats and swears and throws crumpled paper on the floor, Jimmy Breslin smokes. The butts pile up in the ashtray and spill over and join the snowflakes on the floor.

It’s the end of the first week. Things aren’t going too well. He hasn’t captured the fire. He knows it. He shows me yet another draft.

How do you tell the great Breslin how to write?

Outside the cubicle, overflowing the biggest chair in the newsroom, Fat Thomas watches Breslin write and re-write and sweat and swear and smoke and you know Fat Thomas would much rather watch horses run around in circles.

Inside his cubicle, Breslin and I re-work the column. Again and again. For Breslin, every sentence and word must be right. Every time. Only the best. Only the exact and perfect sentences and words will do.

In exact and perfect order.

Sentences are born. Sentences die. Words are born. Words die. Breslin searches for the fire, the music. In the end, he wants the words to disappear. Leaving only the feeling, the emotion.

That’s how poets do their thing.

Now, because Jimmy Breslin cares so much and knows that words can do wonderful things to the soul, his words turn into music and Breslin is writing a love song about this boy who pushes drugs and his sisters and is shot down by a cop while “trying to escape.”

The words, and only the right words, have come. Unsentimental words. Honest words. Vulnerable words. Compassionate words. Now, Breslin’s words and sentences touch the soul. And make it sing.

“Just talk it, Jimmy” I say. “That’s all. Just talk it. Like you’re talking to Fat Thomas.”

And Jimmy Breslin forgets that he’s really a newspaperman trying to make it on TV and forgets the camera and its red light staring at him and talks into the microphone just like he talks to Fat Thomas, but without the swearing.

The fifth take is a keeper.

“Beautiful. I couldn’t have done it without ya, Tim” says Breslin. “Thanks buddy.” Fat Thomas says something about horses and how, if they hurry, they can make the fifth race.

Jimmy Breslin calls his wife, the former Rosemary Dattolico, and says he’ll be home late. Not to wait up.

I ask Jimmy to autograph a book of his columns.

“It’s a pleasure to do business with you, Tim” he writes. “Take Care, Jimmy Breslin.”

He shakes my hand. “I couldn’t have done it without ya, Tim”

And he and Fat Thomas walk out through the newsroom, out into the late afternoon sunlight to catch a cab that will take them to watch horses run around in circles.

Somehow — and it can’t have been easy — he does it without me.

It was a pleasure to do business with you, Jimmy.

Tim Knight is an Emmy-winning journalist, filmmaker and writer who’s worked for three newspapers, United Press International (three years, two wars in Congo), CBC in Canada and ABC, NBC and PBS out of New York. He’s the author of  Storytelling and the Anima Factor, now in its second edition, from which this article is adapted. He’s based in Cape Town. www.TimKnight.org.